Hurricane season officially started around a week ago, and it's time to really start thinking about what we're in for this year. We still have a while before things really ramp up, but the ocean is slowly starting to become a more favorable place for tropical genesis. In my first forecast, my thoughts favored a slightly below average season, but now, I'm thinking we could be seeing an above average season due to a variety of reasons. I talk about the main factors that went into my revised hurricane forecast below, so keep reading!

First, I will be talking about the most pivotal player when it comes to tropical activity in the Atlantic, the ENSO. We've been in a weak El Niño since last year, and it hasn't been very impressive. It hasn't been able to strengthen because the atmosphere has been fighting it since the beginning. The El Niño only works if both the SST's and atmosphere couple, but that hasn't been the case for this one. Now, the El Niño actually seems to be weakening for a variety of reasons that I won't go over for simplicity sake. So what does this mean for the hurricane season?

The picture above shows the West African Monsoon (WAM). As you can see, there is very robust convection in a large portion of the area. There is no index to measure the WAM, but we can figure out how strong how WAM is by looking at the amount of convection in this area. Since it's very strong and plentiful, we know the WAM is strong. If it continues to stay strong throughout hurricane season, we'll have strong tropical waves that come off of Africa that have a much better chance to survive and strengthen than weaker waves would. 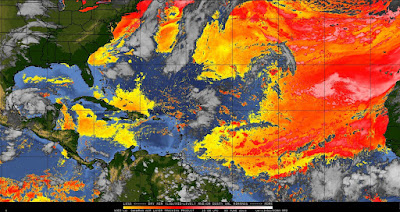 The next thing I'm going to talk about is the Saharan Air Layer (SAL). We've recently had a very strong SAL burst spilling a massive amount of dry air into the Atlantic. This is normal for this early in the season, and the Atlantic should become more hospitable for storms over the next month or two. It's difficult to predict how strong the SAL will be during the peak of the season. But the WAM being very wet may be a sign that the SAL won't be too powerful. We'll just have to see how it's looking in the weeks ahead. 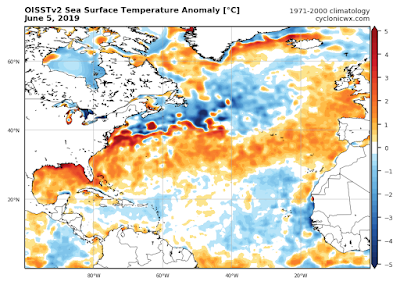 The final factor I'll be talking about is SST anomalies. I saved this for last because the other factors I covered can play a roll in SST's. Recently, we've had a major cooling of the MDR due to the major SAL outbreak. Before this outbreak, the MDR was actually slightly above average, so we'll see if it's able to rebound or not. Another thing to note is the warmth in the subtropics. If the cool MDR and warm subtropics were to hold, this year would favor numerous weaker storms. Also, the Gulf of Mexico and the East Coast have SST's that are well above average, so they need to be watched very closely. 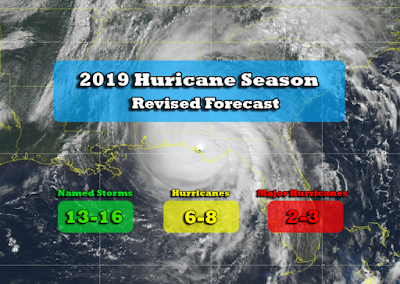 I've given all the facts, so now I'll give my opinion. I believe the SAL outbreak is the entire reason the MDR has cooled, and that it will be able to rebound quickly once the SAL backs off. If we have a slightly above average MDR, a warm neutral ENSO, and a strong WAM, it is likely we'll have quite a few strong storms to watch. Because of this, I have upped my predictions for all three categories. The Atlantic is trending in the right direction for an active season, and I believe we'll have a lot to watch this hurricane season.

I may make one more forecast if I feel like a major change is needed, but I can't guarantee it. Thanks for reading and I hope you enjoyed!