Why Was This Winter So Quiet? 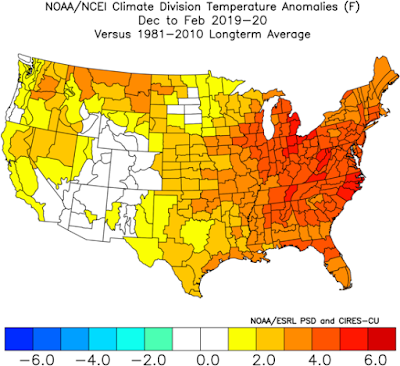 This winter hasn't really felt like winter. Aside from a few cold (but not frigid) blasts, it was more like November spread over a 3 month period. And the amount of snow DCA saw was comparable to many November storms that we've had. But why was this winter so unwinterlike? Let's start by looking at the arctic. 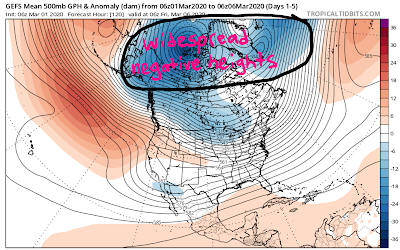 
The reason we had little to no heat transported to the arctic was because the MJO (Madden Julian Oscillation) was weak for much of the winter. The MJO is an index that measures how much convective activity there is in the tropics, and measures where the convection is centered. A weak MJO means less convective activity in the tropics overall. With less convection, less heat gets transported out of the tropics, so little to no heat reaches the Arctic.

So the MJO explains why no arctic bursts reached the mid-latitudes this year, but it also explains another feature we were lacking this winter; storms. The MJO was stuck in phases 4/5/6 for much of the winter. These phases favor convection over in the Western Pacific, far away from the US. The combination of the weak MJO (meaning less convection in general) and convection being favored away from the US significantly limited the number of powerful storms we saw this winter. 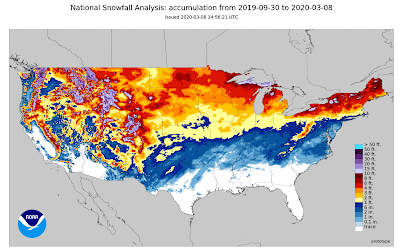 The US lacked cold air and strong storms this winter, so much of the country, especially east of the Rockies, experienced an unusually tranquil winter. Many people love this type of winter, but if you're like me, you probably wish you saw more white stuff falling from the sky. Thanks for reading, and follow me on Twitter @DCAreaWx if you haven't already!